Commercial Spaceports are the next generation of transportation hubs. Within a few decades, hypersonic aircraft will connect any two destinations on the planet in four hours, with sub-orbital flights. This will require a paradigm shift in the design of transportation systems that can provide safe and efficient travel options for the future. This will also effect how we plan our urban infrastructure radically altering our lifestyles. Consider the systems required at these transportation hubs; local, regional and international connections; the types of vehicles; hotels; offices and recreational facilities. 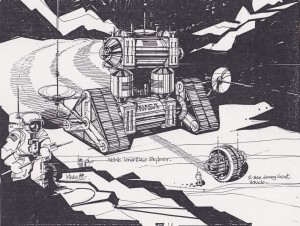 The Shuttle fleet has been retired after three decades of operations. We are now on the verge of “single stage to orbit” technologies which will take us beyond our solar system. Space will become the new frontier for many commercial operations and we will need Spaceports. The challenges are enormous but work has already begun on the future of commercial space flight. We are exploring these ideas, establishing new parameters, creating the infrastructure to transport valuable cargo within four hours between any two points on the planet. We have been very fortunate to have the opportunity to combine imagination and technology, creating a vision of the future that will serve as a paradigm shift in determining the lifestyles of future generations.

Human beings have always had an instinctive urge to explore new territories and understand their place in this universe. Early explorers were the first of our kind to seek knowledge in unknown places. This blue planet is our only home and we have no choice but to learn to co-exist in harmony and mutual understanding. Today, we find ourselves in a global village, interdependent on one another unlike any other time in recorded history. We are also looking at the stars with the same sense of wonder and excitement that must have motivated our predecessors to launch their fragile ships into the unknown oceans.

Space flight is still in its infancy. The second half of the last century has seen spectacular advances in technology. The evolution of many of these technologies began with the Space Program, and commercial applications followed leading to the products we use today. The next generation cannot even comprehend life without computers and the internet. Advances by the middle of this century will go well beyond our wildest imagination. Spaceports will become the logical extensions of our existing transportation hubs. All transportation systems serve the basic need to move people and goods between two defined points in relative safety, with speed and efficiency. Commerce drives the need to transport goods, and people follow. This has been the functional model throughout history. Initially, spaceports will be used for orbital flights that will shrink travel time, between the furthest urban centers on the planet, to less than three hours. Eventually, we will travel to other planetary bodies in our solar system, and finally into deep space to explore the vast universe.

The United States and Russia have already established a presence in Space, and many other nations are following their lead. Private corporations are exploring these options and showing interest in developing spacecraft. We feel that the time is right to suggest ideas and create synergistic models that can provide a comprehensive approach to the planning and design of future spaceports. Initially, six basic areas have been identified to develop the space complex. Additional components and site specific requirements may be considered once the project moves forward.

The major component of the spaceport is a commercial long haul airport, with multiple runways, capable of handling the largest aircraft. This airport has four sections. The first section is an executive jetport for VIP’s and astronauts. The second section is a passenger
terminal for commercial airline passengers. The third section is a major distribution center for air cargo and overnight couriers, and the fourth section is consists of landing and take-off zones for spacecraft. These will include both single stage to orbit, and multi-stage to orbit vehicles.

The second major component is an inter-modal center. This includes passenger vehicles, buses, monorails, trains, air-ferries to other regional airports, and hydrofoils if the site has access to waterways. This facility will also have a series of unique parking structures, providing a seamless transfer of cargo and people between different transportation systems.

The spaceport would have at least two types of hotels. One would be an exclusive resort for VIP’s with special facilities to meet the needs of astronauts, such as an educational center for pre-flight, zero-g tanks, flight simulators, conference center, space medicine and fitness. The second would be a five star hotel for regular guests and commuters. Recreation facilities would include golf courses, tennis courts, swimming pools along with the usual amenities provided in such developments.

The commercial zone of the property consists of corporate/government offices of various agencies, related to the efficient operations of the spaceport. There would also be service and maintenance hangers for aircraft, and a modification center for corporate jets. Research and development facilities would provide access to industry and consumers, in the technology showcase section. This could include TransTech, LandLab, EnergyFarm and CommunicationStation.

WorldExpo is the entertainment and cultural component of the spaceport. This area will provide an experience for guests to sample the food, music, arts, handicrafts, shows and learn about places of interest from countries around the globe. This exchange would promote tourism, encourage trade, and develop a sense of global cooperation. It would combine education with entertainment, and develop a sense of appreciation for different cultures from around the world. The SpaceCamp section would provide an interactive, hands-on experience for children. This area would include a museum, a planetarium, an IMAX theater and an exploratorium to entertain, educate and stimulate people of all ages.

The Security and Command Center is the “brain” of spaceport. It is an essential component of the efficient operations and management of the complex. However, it would also coordinate the logistics for global disasters. Access to all the major transportation links, warehousing facilities and the latest in global communication technologies would make this a logical site for moving people and supplies quickly to disaster areas for emergency relief.