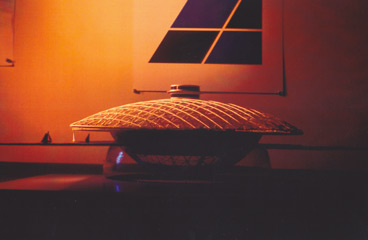 The involvement of Conceptual Design Group with transportation systems goes back 30 years when, as a group of graduating students at the Art Center College of Design, we were asked by General Motors to develop a mass-transit system for the City of Irvine, California. This included High Speed Trains, People Movers, and specific vehicles for public agencies. These systems were integrated to form a total transportation matrix for the City of Irvine.

In the last decade, our company has grown into a multi-disciplinary design firm involved in Entertainment Architecture, Industrial Design and Transportation projects worldwide. Our comprehensive design and engineering services can take a project from initial concepts to construction documents and prototypes.

We worked with the City of Anaheim to develop the Anaheim Regional Transportation Intermodal Center. This major terminal is proposed as a hub for eight major transportation systems, including the High Speed Train between Anaheim and Las Vegas, the “CenterLine” project, the Anaheim Resort People Mover and a new Amtrak Terminal.

We have presented plans for a major transportation hub in the City of Irvine. This will form the new Irvine Transportation Center at the Spectrum and become the Gateway to the redevelopment of the former El Toro Marine Corp Air Station.

The San Diego Association of Governments asked us to develop preliminary plans for five cities in the San Diego area that include major transportation centers. These include light rail, commuter rail and regional bus terminals.

The systems we have worked on include “MagLev” technologies, linear induction motors, and innovative hybrid systems using photovoltaic and fuel cell technologies.