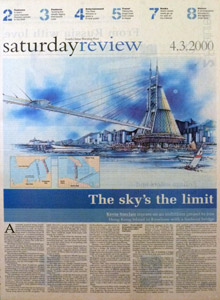 A futuristic proposal being considered by the Government will allow pedestrians to walk 20 storeys above Victoria Harbour from Hong Kong island to Kowloon in just 20 minutes, Studio Quorum, a US-based consortium of architects, designers and engineers, wants to build a $32 billion pedestrian bridge linking either Tin Hau to Hunghom, or Quarry Bay to the lip of the old Kai Tak airport runway.

The design concept includes identical half-pyramid shaped 57-storey buildings built on enormous steel podiums. The buildings would anchor a cable-stayed span almost a kilometer in length 20 storeys above the water.

The concept is ambitious. It would be the longest cable-stayed bridge in the world. As envisaged in specifications submitted to the Government, the main span of the Dragon Pearl Bridge would be 960 metres, with the total length of the bridge 1.37 kilometres.

The bridge deck, made of steel box girders, would be 27 metres wide and designed with similar technology to an aircraft’s wing to withstand typhoons. At the centre of the bridge would be the Pearl, a climate-controlled public concourse.

The submission was made by David Nixon, a British-born architect based in Los Angeles who is a director of Studio Quorum. He said he has received a “cautiously friendly” reception from government planning and tourism officials and overwhelming support from representatives of the tourist industry.